STONEHENGE AND THE DRUIDS

For many it is a sight of genuine religious importance.

Stonehenge’s mysterious beauty affects us all in different ways, but for many it is a sight of genuine religious importance.

‘Druids’ is the general term used to refer to this multitudinous group who see Wiltshire’s world heritage site as a place of worship. In reality, Druidic beliefs vary, with different groups including neo-pagans and wiccans. Nonetheless, a whole host of Druidic worshippers converge on Stonehenge for the solstices, equinoxes and beyond. Today, there are over 7,000 members of the British druid order and I wanted to take a look at the history of druidism and its ties with Stonehenge’s arcane monoliths.

Druids pre-dated the Roman invasion of Britain and in ancient Celtic cultures they were members of highly respected shamanic class. They were typically religious leaders, but also law keepers, chroniclers, doctors, and even political advisors. They were first mentioned in the 2nd century BC in roman sources and were even reported by Julius Caesar in 59 B.C. Druid’s were the arbiters of spirituality in pre-roman Britain and had a deep connection with the lore of the isles.With first the Roman invasion (Roman religion tended towards assimilation, absorbing deities of other faiths in the hope of conversion) and then the rise of Christianity, Druidism faded into near non-existence. However, something of Druidic traditions remained and was eventually revived.

Two figures of huge importance to the Druidic revival were John Aubrey (1626-1692) and William Stukely (1687-1765). Aubrey was the first to suggest that Stonehenge had been built by Celtic Druids, the most prominent theory on the formation of Stonehenge until the 20th Century. Stukely (also famous for discovering the Cursus and Avenue at Stonehenge), proliferated the theory that Druid’s built Stonehenge and also worked hard to revive the culture, eventually proclaiming himself a Druid. Stukley worked hard to popularise Druidism, reviving pagan lore and dress whilst throwing parties in accordance with ancient beliefs. For Stukley, Stonehenge was a temple of worship – eventually publishing Stonehenge: A Temple Restor’d to the British Druids.

The origin of the word ‘Druid’’ is unclear, but the most popular view is that it comes from ‘doire’, an Irish-Gaelic word for oak tree (often a symbol of knowledge), also meaning ‘wisdom’. Druids were concerned with the natural world and its powers, and considered trees sacred, particularly the oak.

Today, the most prominent druid could be said to be a Salisbury Druid by the name of Arthur Uthur Pendragon – who has spent 33 years a Druid. A religious enthusiast, he can be found at every Stonehenge celebration and he also leads campaigns to reduce parking fees and has even run for MP.

From the time of the Celtic Druids, Druidism has had a strong bond with the natural world as well as the cosmos. Although Stukley determinedly linked his version of Druidism with Christianity – dubbing it ‘Patriarchal Christianity’ – Druidism since ancient times has been polytheistic, with different deities existing in the elements around us. The community largely believes that Stonehenge was built by ancient Druids as a place of worship – it being aligned with the midsummer sunrise so perfectly. Stonehenge thus represents the spiritual connection of man and the elements which is intrinsic to the beliefs of the Druid community.

Although the 21st century has seen a decline in Druidism, (In the 2001 census 30,569 people described themselves as Druids), the numbers are once again on the rise. Perhaps in a digital age, more and more people are seeking a deeper connection with the elements. A connection that Druidism certainly offers. Who knows? Maybe you too will feel this spiritual connection on your visit to the stones.

Visit our Stonehenge Tour Blog for more facts, history and all the latest Stonehenge news‍

Book with the Stonehenge Experts

Our guides are carefully selected for their personality, wide knowledge and genuine enthusiasm for our style of tours. Never boring - you will find them informative, professional but down to earth with a real passion for showing you the very best of Britain! They pride themselves on entertaining you with tales of England's rich history, culture and legend to ensure a memorable experience of the real England.

Of course all our drivers and guides are professional / licensed and trained to meet the high standards of the London Tourist Board's 'Welcome Host' program.

Relevant entrance fees are included (some tours include lunch in historic pub) with no Hidden Extras. We have Priority Entrance into all attractions. No Questions giving more time to explore.We Guarantee that you wouldn't be able to visit the same places in one day, or at a cheaper price, by raveling independently using public transport.

Please visit our Stonehenge Tour Blog for more facts, history and all the latest Stonehenge news. 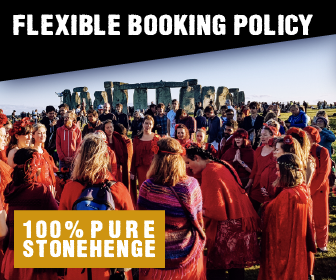 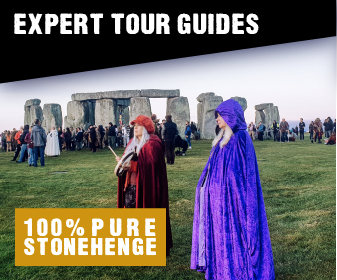